The Centro de Investigaciones Regionales de Mesoamérica (CIRMA) is a nonprofit Guatemalan foundation of an educational, scientific, academic, and cultural mission that is unaffiliated to any political or religious organization. Since its foundation in 1978, its efforts have focused on the recovery, organization, conservation, preservation, and dissemination of the visual and documentary heritage of the Mesoamerican region, with an emphasis on Guatemala. The three main collecting areas of CIRMA are:

Social Sciences Library. Founded in 1978, the Social Sciences Library is the oldest of CIRMA’s three collection areas. Beginning with the merger of some of the founders’ personal libraries, it has become the prominent social science collection on the Mesoamerican region available. The Library has more than 65,000 titles, 8,000 documents, an extensive range of journals, and a welcoming reading room for researchers. Additionally, the Library is proud to hold in its Special Collections Hall two collections comprising true bibliographic jewels: the Franz Termer Collection, with works dating from the early 17th century, and the Antique Book Collection, which contains relics from the early 18th to the mid-19th century.

Guatemala Photography Library. The Guatemala Photography Library, created in 1979, is the result of the most significant effort to preserve the visual memory of Guatemala. Its collections portray the different ethnic, social, and political groups in the country from 1850 to the present, providing a rich record of the country's historical evolution. In addition, they reflect the cultural traditions, daily life, art, architecture, political events, and natural disasters of the last 150 years. Today, it has 205 collections that together contain more than 1.5 million photographs in formats ranging from daguerreotypes and negatives on glass plates, to digital images. The Photography Library encourages its users to consider each photograph not only as an illustration, but also as an opportunity for new research possibilities.

Historical Archive. Founded in 1997, the Historical Archive’s main purpose is to preserve part of the country's historical memory through its primary sources archive. The materials come from non-governmental institutions and private collections in different formats (paper, digital, microfilm, audio, and video). These archives, some unique and others relatively unknown, enrich the nation’s historical legacy and offer different points of view of Guatemalan society over time. The collections of the Historical Archive, some recognized as national cultural heritage, date from the 16th century to the present, with an emphasis on the contemporary era after 1944. Currently, the archive holds 149 collections comprising more than 8.5 million documents, as well as an important collection of historic maps. 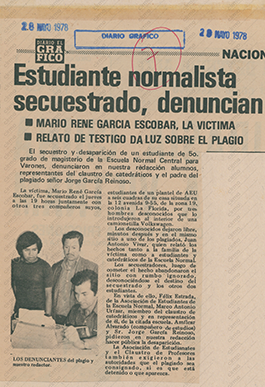 Inforpress Centroamericana was an enterprise established in 1972. Its primary objective was to analyze and present, in a professional journalistic style, economic, political, and social information of the Central American region. Inforpress used national and regional press and archival sources to achieve its objective. These sources were compiled and organized by Inforpress ... Read more.