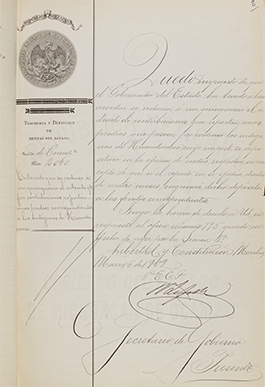 Title: Colección Digital Libros de Hijuelas de Michoacán de Ocampo
UUID: 27424cc2-f0a8-4698-b059-88bc689a6d08
Description
The Libros de Hijuelas (“deed books”) consist of 194 leather-bound volumes containing 46,045 fojas (folios). The physical books occupy 6.35 linear meters and in digital form present 92,090 images, given that the recto and verso pages of each folio are photographed. All the documents pertain to, or are precursors of, a centrally important historical process in Latin America: the privatization of indigenous corporate property under liberal administrations, in this case in 19th-century Michoacán, Mexico.

The earliest original documents are from the 18th century, though there are copies of documents from the 1530s onwards, which are themselves valuable since so many colonial land documents are lost. The most recent documents date from the 1920s, but these are outliers and there are few post-1910 documents. Perhaps the longest series dates from 1868, when the state government published its decree requiring indigenous communities to privatize communal lands by forming surveying commissions for the purpose and then, in the presence of a magistrate, deeding plots to individual members of the ex-community. There are also large numbers of documents from preceding decades (the 1820s–1840s especially), which were used in the context of the 1868 reparto to prove (or claim) historic ownership or occupancy of lands slated for privatization. Lastly, there are long runs of documents from the 1870s onwards, when indigenous communities were contesting the reparto and seeking to control its impact via simulated land sales and many other appropriation or resistance strategies.

In terms of genre, the hijuelas books contain legal acts, cadastral surveys, village censuses (padrones), and letters, many of the latter written by indigenous michoacanos of Purépecha, Nahua, Mazahua, Matzatlinca, or Otomí heritage. Documents are in Spanish. Aside from printed decrees, the documents are handwritten manuscripts. The collection is organized pueblo by pueblo, and district by district, according to the political division of Michoacán into 17 districts under the Organic Law of April 10, 1868. (In fact the collection is organized erroneously: it counts 16 districts, not 17, and excludes two actual districts, Los Reyes and Purépero, while describing one municipality, Zacapu, as a district). As such, the hijuelas collection provides the most complete historical account of the land privatization process across a whole state. Since Michoacán was formerly the seat of an indigenous empire (the Purépecha) and an imperial borderland for other indigenous groups, the hijuelas are important because they record the privatization experience from a plurality of indigenous perspectives.

The digital collection is hosted by the British Library's Endangered Archives Programme and can viewed at the following external link: https://eap.bl.uk/project/EAP931/search.